Inter A Session One Details

Inter B Pairs Session One Result 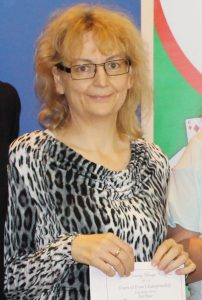 We are all saddened to hear of the death of our dear friend Mary Finn after a short illness – just a week after turning 50.   Mary was one of Ireland’s top Bridge players, attaining the rank of Life Master and representing Ireland at International level on a number of occasions.    Despite her young age, Mary won most of the National titles – winning the National President’s Prize as recently as last September.  Mary was favourite to win any competition she entered and she will be missed by her regular partners Ciara Burns, Cian Holland, Sean O’Lubaigh, Sean Gillan and many others.  Despite her prowess at the game, she still found time to mingle with the rest of us and was a great supporter of local Bridge Congresses all around the country – both North and South of the border.  Mary was one of those rare players that are a tournament director’s dream – you never knew she was in the room – she came in quietly, she played quietly and she left quietly.   She had that beautiful inner trait that helped her avoid any arguments or controversies either at the table or away from the table.   Although she was quiet she had a few good witty Bridge stories to recount.

We were honoured to have had her with us in Sligo for the past four years and I have instances of her refusing to take prizemoney and looking the other way when her opponents made mistakes.  She was always on hand to offer help and we will sorely miss her.  Irish Bridge has lost another of its truly Great People.  A special mention to Ena and Aidan Cleary who took Mary under their wings over the years.  We extend our deepest sympathies to her brothers and sister – Patrick, Jimmy, Tom, John and Catherine.